Yesterday, we pulled into Battleford, Alberta for the night.  As Dad was trying to keep us from dying, he hit a curb and blew a tire on the trailer.  First tire casualty and it wasn’t the roads fault.  We were going to spend the night in the Walmart parking lot, but decided we both wanted to take showers and take a break from the trailer.  So, we got a hotel room.  The Travelodge.  It was just renovated and the rooms were very nice…….but…..no A/C.  The room was extremely hot, but the beds were extremely comfortable.  So, we took out showers, opened a window, had a few drinks, and went to sleep.

We left The Battlefords this morning and was able to arrive in Dawson Creek, British Columbia for a grand total of 598 miles.  It was a tough one, but we did it.  We drove for almost 12 hours.  Tomorrow we are just going to drive as far as we can.  There is still a little snow on the ground,  frozen lakes and ponds, and break up is almost over for Canada.  Crossing rivers you can see the large floating ice burgs flowing down and the flooding that happens when snow melts.

Driving was nerve racking and stressful.  There were times I did’t know if we were going to be able to find a gas station to fill up Spike with diesel.  We managed to pull through without running out of fuel.  The roads are worse than the ALCAN!  Riding in the truck towing the large trailer and hitting bumps, dips, holes, cracks in the road feel like you’re being manipulated in a washing machine.  I feel my brain rattling in my head and it’s been giving me headaches.  Once we stop driving, my head calms down.

Tomorrow we start on the ALCAN where the roads are actually less bumpy and torcheres  than Canadian roads.  If we keep going driving the distance we are doing, we can be home hopefully in four days.  We have to stop in Ninilchik, AK to pick up Trubel, our new bear dog puppy.  She’s a cutie!

Tonight, we are staying in the Walmart parking lot in Dawson Creek.  I am sitting in the McDonalds as I write this blog.  Dinner.  Dinner is and was awesome.  Have you ever heard of Poutine?  Nothing like gravy, real cheese curds and fries.  YUMMY!!!! 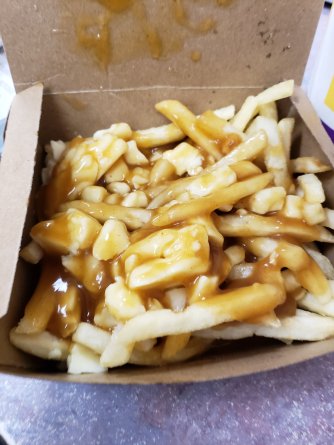 So.  Like I said.  We are just going to drive tomorrow.  I have no idea hoe far and where we will be sleeping.  I love a good adventure.

I hope I can blog tomorrow.  It’s hard to find internet when there are no campsites open yet.  Hence, McDonalds.

Have been running around gathering up trivial stuff like water heater, wood stove, insulation for the water house, water pump and well pressure tanks. Finally, have electricity and water. Been running on the generator to the tune of $20 a day. Been paying $7.50 for a shower and $11 a load to wash $5 to dry. Had a couple of rainy days but the temp has been in the mid to high fifties everyday. The trailer has water and electricity, but the house is yet to be connected. Water will be connected on Day Ten, I hope. Having a real flushing commode will be a luxury we haven’t had for weeks. Trailer commodes are little more than outhouses with water rinse. It just ain’t the same. Same for the refrigerator and stove. You can use them but it ain’t the same.
Had to give away our bear dog named Bear. He kept running off every time he was let out. Most of the time he came home but someone picked him up on the main road and took him to the Animal Control people. He was chipped and had Summer’s phone number on his tag but we found out about it on a neighbor’s Fakebook page. Went down to bail him out and they apologized for not calling and then told us that his chip had not been updated. Summer updated it weeks ago but somehow it didn’t take. Gave him to a nice family with two children and a fenced yard in the city. He’s safer and better off than he would have been here with us. Still was sorry to see him go.
We’ve been eating pretty well, in spite, of the minimalist cooking facilities and limited refrigerator space. I’ve gone from size 40 to about 37 and Summer has lost about 10 pounds. We aren’t snacking and we usually only eat twice a day. It’s the Alaska Diet: Work your ass off and don’t eat.
The view from our house is nothing less than stunning. We can see a couple of glaciers, snow capped peaks and down onto Kachemack Bay. We’re living on a dirt road with Napoleonic tendencies as it calls itself an Avenue. Looks more like a driveway.
Onward to Day Ten.

We Made It!  Thank you Jesus! 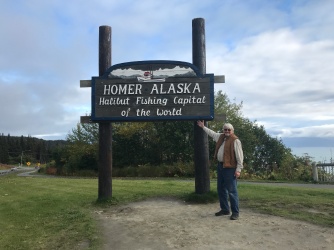 Okay.  So here is what you missed.  We made it to Homer Monday the 18th of September late afternoon/early evening.  The relief was incredible.  We make our way up Pioneer Ave out of the city limits of Homer and proceed to Fritz Creek to find our new home.  I have been studying the google maps so I could drive straight to it, which we did.  Unfortunately, Bertha the Beast just couldn’t make the last 150-200 yards to the road to the house.  She stalled.  I passed them and made it to the house and tried my best to separate the fifth wheel camper off Spike the Truck but no one was having it.  I cussed, kicked, yelled at the camper to get off the truck, but it didn’t.

Luckily, our new neighbor Greg happened to be driving by and helped poor Bertha up the hill with my Dad.

We have no water or power and NO INTERNET at the new house.  I am sitting at an place called the Washboard where Dad and I have wash and dried clothes, taken showers and taking advantage of the internet. 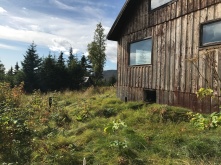 The house has some issues, but we will be taking care of those ASAP.  On the positive side we have some incredible views of the mountains and glaciers. 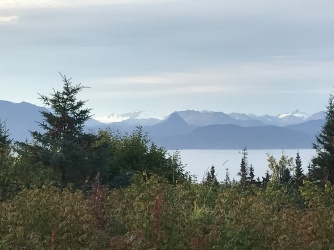 The other day, Dad and I went to Kenai to go to the Super Walmart and Home Depot.

The Walmart there is so big.  I have never seen anything like it.  They also sell crampons.

As you can see in the first photo, it just keeps going and then the next one was what was behind me.  The process were very similar to the Walmart back in Florida.

The dogs were happy to be out of the car.  The little ones are happy to be in the camper, but Bear wants to run.  We’ve already had to pick him up from the Animal Shelter once already.  He just wants to follow his nose.

All and all, we are here, we are tired due to 4 time zone changes, but we are all safe.

Dad and I ordered a 24ft enclosed trailer and yesterday went to pick it up in Douglas Georgia. We drove up 2 hours to pick it up.  The paperwork was so easy and the people we really nice. But……..When we were waiting on the trailer it never came.  No one thought to tell us that  there was a part missing, a side light to be exact.   Turns out they hadn’t had a new shipment in of these parts in a while due to holidays and what not.  Which was fine because they cannibalized another trailer for the light.  So, then we finally get our trailer and guess what it’s missing!!!!

Now we have waited about an hour and a half for a trailer that we thought was finished and went through quality control.

After all that, we finally got our trailer.

On they way home we had to stop at Lowe’s and get more boxes, axes, hatchets, etc.  We decided to open the side door of the trailer and put the boxes in it to keep them dry if it were to rain.

Well ain’t that some shiitake mushrooms!

Over all, the people were nice but the quality of our trailer kind of bites!  It really sucks you have to go behind people and fix mistakes on something brand spanking new. 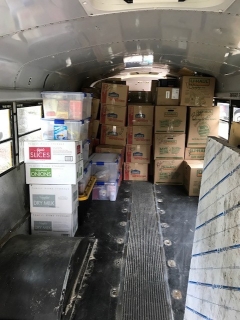 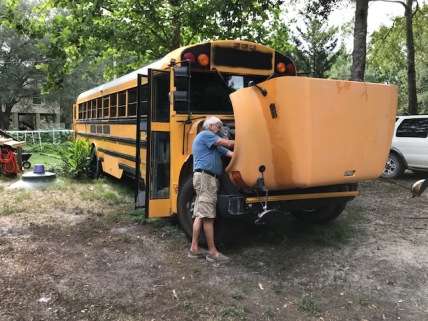 We are packing up all our crap!  All of it!  It’s hot and humid here in Florida and it hasn’t rained in a long while.  It’s dusty and sandy and I hate it.

Dad was busy checking the engine of the bus and refilling fluids so “ALASKA OR BUSt” is ready to go!  We’ve also started filling the bus with all our belongings which had proved to be hot and exhausting task. It’s 5:36 pm Florida time and we have finally quite.  Sitting down and cooling off with a cold adult beverage.

Your probably thinking that it’s not very difficult to carry things out of a house and put it in a bus, but your house isn’t on a river and is stilted 17 feet hight off the ground.  That’s 22 steps up and down carrying boxes out to the bus.  I’m beat!

So the other day we found a wonderful dog at the Suwannee County Animal Shelter.  His name is Bear (which we found appropriate) our new family member!  He is loyal, flea bitten, lovable, and over exuberant!  He was so excited that he ran the walls of my house until he tired and then I gave him the bath of a lifetime.  He was falling asleep as I was scrubbing all the dirt and fleas off of him.  I love Beagles!  My old dog that I lost, Cookie, was part Beagle and Bear acts just like her.  It was meant to be!  Since his wash today he has found comfort in the A/C vent on the floor and laying over it felt oh so good.  He is so skinny and ate a huge meal this evening and is now sleeping again on the floor.  I just love a pound puppy!  It’s been a longtime since I’ve seen a dog feel so blessed.

Please adopt a pound puppy!  They will always feel blessed to have you!